Notice the juxtaposition of the Chiefs branding with the “End Racism” end zone printing. The irony in this image is stunning! 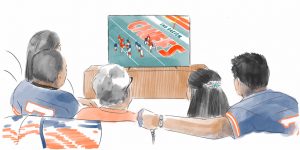 GABRIELLA TRUJILLO
In 2020 there has been a strong push for sports teams to change their branding if they are using a Native American name as a team mascot. Earlier this year the Washington Redskins changed to The Washington Football Team (I bet merchandise sales are not big for that moniker).

However, in a recent article on fivethirtyeight.com (https://fivethirtyeight.com/features/hundreds-of-schools-are-still-using-native-americans-as-team-mascots/) Hope Allchin notes that there are some sports teams that are fighting this trend.

Most states allow the use of Native American mascot names. Maine is the only state that banned it. A few years ago the NCAA adopted regulations indicating that teams with “hostile and abusive racial/ethnic/national origin mascots, nicknames or imagery” would be prevented from hosting NCAA championship events and required to use equipment that didn’t display that imagery in championship games. But there is a loophole. The NCAA allows Native American mascot names if the name is supported by a local Indigenous tribe. For example, because a single band of the Seminole tribe — the band that resides in Florida — supports the use of the Seminole mascot, Florida State University can continue its use of the Seminole mascot.

But there are still holdouts such as the Kansas City Chiefs. While the Chiefs have instituted several efforts to reduce the appearance of being racist (e.g., no face painting or wearing of feather headdresses), they are sticking to the Chiefs nickname.

The Washington Redskins were forced to change their name through a combination of political and economic pressure from local politicians, sponsors and advertisers. FedEx, who is the naming rights sponsor of the FedEx Field where The Washington Football Team plays, was a leader in getting ownership to make the change. Until the Chiefs organization receives similar economic pressure from advertisers and sponsors, they will not change. We will see how this plays out!