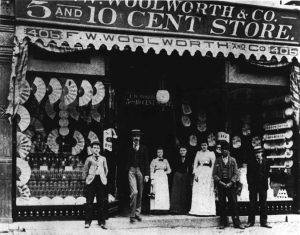 Frank Winfield Woolworth, who founded the F. W. Woolworth Company in 1879, was the innovator in variety stores known as “Five-and-Ten-Cent Stores” which featured a wide selection of low-priced merchandise at a low fixed price. For many years the company did a strictly “five-and-ten cent” business, but in the spring of 1932, it added a 20-cent line of merchandise. By 1935, the company’s directors decided to discontinue selling-price limits altogether.

A similar situation arose this past week when Dollar Tree Inc., who is known for selling goods for $1, announced it will establish new higher price levels such as $1.25 and $1.50, citing broken supply chains and higher labor costs as the reasons for the increase.

Dollar General Corp. broke the $1 price point several years ago, and Five Below Inc., which features goods at prices below $5, recently announced it will sell goods priced above $5.

Have these brands outgrown their names?

I believe they have outgrown their names, but I also do not expect them to change their names. Establishing a new trademark is expensive and time consuming, and companies would not want to risk losing their existing equity in their brands.

However, their situation should make you think about your branding situation, especially if you are just starting your company. Don’t pick a name that you will outgrow in a few years.

Burlington Coat Factory was started as a wholesale outerwear business in Burlington, New Jersey. I’d say their name was limiting in two ways: geographically (because they would expand beyond Burlington, New Jersey) and from a product line standpoint as they quickly evolved to other clothing items. How much business was lost because people thought they sold only coats?

The Dunkin’ Donuts brand recently dropped Donuts from their name and became just Dunkin’ to reflect the fact that most of their sales come from drinks not donuts.

Don’t outgrow your name. Plan for future expansion by at least considering what your business will look like in 10 years. Then make sure your name can accommodate that future!