Creating fictitious names for products is standard practice in many industries. Creating a brand that evokes a certain image or feeling is so commonplace that most of us don’t think twice about it. 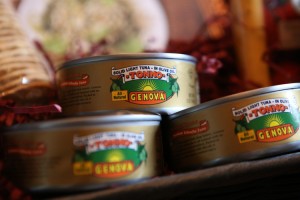 Consider Genova Tonno. In the Italian language, Genova is the city of Genoa, and Tonno is tuna. So you might infer that a can of Genova Tonno contains tuna caught in the waters off Genoa. Actually, Genova Tonno is a specialty brand of tuna owned by Chicken of the Sea. The label says:

Genova Tonno© Premium Yellowfin Tuna. Wild caught from deep waters, Genova Select Yellowfin is all natural with no additives or preservatives. Genova is packed in the Mediterranean tradition with olive oil, which provides a rich and delicious flavor.

Chicken of the Sea is owned by a Thai-based company called Thai Union, which has its own packing facilities in Thailand. While the source of its tuna is never identified beyond “deep waters” it is believed that those deep waters are not off the coast of Italy, but rather are off the coast of Thailand.

By all reports, this is very tasty tuna. Do you really care that the manufacturer is positioning its product as being Italian when its heritage is clearly not Italian? If so, perhaps you should buy Asdomar which claims that its tuna is “100% processed in Italy.” Note: even this does not mean that all of their tuna is caught near Italy

Need another example? Would you be upset to know that Häagen-Dazs was born in the Bronx, New York in 1961? Its creators were not Scandinavians but rather two Polish immigrants, Reuben and Rose Mattus. Why did they choose the name Häagen-Dazs? The name was created to look Scandinavian for Americans because the European cachet radiates craftsmanship, tradition, and wholesomeness, thereby justifying the higher price.

Recently in the UK, Tesco has been drawing flak from consumers because they created seven fictitious farm names and are using them in marketing their products. Fake farm names such as Rosedene and Nightingale now provide a cachet to their product lines.

“Authenticity” is a traditional buzzword for marketing. Studies have shown that brands should be authentic to build trust among consumers. At what point does a “fictitious” name cross the “authenticity line” and become a “fake” name?

The Tesco example shows one flash point is food sourcing. Consumers want to know where their food comes from and apparently once people discover that “Rosedene Farms” isn’t a real place they no longer trust that those apples sold under that brand name are of high quality. Critics in the UK are calling this practice “legal deception.”

The US Patent and Trademark Office has a fairly broad definition of what they consider to be “legal deception” in geographic names. The policy of a name being “geographically deceptively misdescriptive” would prevent the registration of such a trademark. According to the USPTO website, “A mark will be refused as primarily geographically deceptively misdescriptive if: (1) the primary significance of the mark is geographic; (2) purchasers would be likely to think that the goods or services originate in the geographic place identified in the mark, i.e., purchasers would make a goods/place or services/place association; and (3) the goods or services do not originate in the place identified in the mark.”

That would seem to indicate that Tesco might be facing some storm clouds on the horizon if they try to register their set of “fake farm names” in the US.

Perhaps I am immune to this issue because I am a professional name developer with 25+ years of experience as a consumer products marketer. I long ago stopped losing sleep over the fact that Betty Crocker isn’t a real person!